Available on Amazon
CLICK ON THE PICS BELOW TO PURCHASE

Every life has its struggles. Its challenges. Its glorious Blessings. Cushena Jordan has experienced all of these, and then some.

In her memoir, “Ain’t Been No Crystal Stair,” Cushena* recounts—honestly and unashamedly—the trials and triumphs, as well as the Blessings and bad choices, which have both cursed and graced her. From her childhood in rural Georgia raised by loving, God-fearing grandparents to the early grief that set her on a path of rebellion; from the search for love “in all the wrong places” that led to infidelity, prison, and divorce to the abortion that haunted her and the birth of the twin boys who are her Greatest Blessing; and from the relationship that brought renewed hope for happiness to the brutal murder that brought those hopes crashing down, Cushena bares her soul as she shares her journey through Hell and—by God’s Grace—the Redemption and Salvation waiting on the other side. 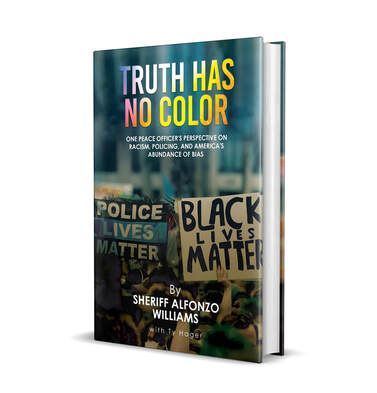 Black Lives Matter. Blue Lives Matter.
In 21st-century America, these aren’t just activist organizations or slogans on protest signs, but concepts that divide us along racial and political lines while disregarding the basic fact that both are absolutely true.
As Burke County, Georgia’s first Black sheriff and a thirty-year veteran of law enforcement, Alfonzo Williams sees the issues from both perspectives, choosing not to view high-profile cases of alleged police misconduct or brutality as Black or Blue but simply as Right or Wrong.
In his fourth book, Truth Has No Color: One Peace Officer's Perspective on Racism, Policing, and America's Abundance of Bias, Sheriff Williams looks at the history of racism and policing, the psychology of bias, and offers his take on a dozen of America’s most famous crimes—from Rodney King to OJ, from Ferguson to Floyd, and from Rayshard Brooks to the riots at the Capitol—choosing not ideological “sides” but the truth. 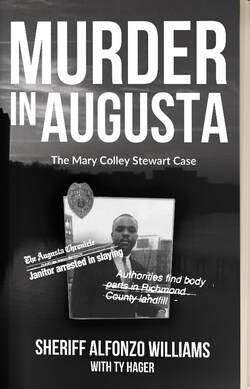 MURDER IN AUGUSTA
The Mary Colley Stewart Case
On May 12, 1994, Mary Colley Stewart was a 37-year-old Medicare Specialist at the Augusta, Georgia Department of Family and Children Services. Robert Eugene Fielding, 43, was a paroled killer who worked there as a janitor. Alfonzo Williams was a detective for the Augusta Police Department, a man of deep faith assigned to missing persons and child-abuse cases. He had just turned 23. The three lives were about to become inextricably linked – one was about to come to a tragic end.
Using case files, interrogation transcripts, crime-scene photos, and new interviews, “Murder in Augusta” goes in-depth into a heinous crime and the subsequent investigation and trial which shocked and fascinated Augusta over a quarter-century ago. From the initial “Missing Person” report to the grisly discovery which turned the disappearance into a murder case, you’ll follow Detective Williams (now sheriff of Burke County, GA) through every step of the investigation which culminated in Fielding’s arrest and conviction, learning along the way that there truly is no such thing as “an open and shut case.”
WITH 27 COLOR PHOTOS! 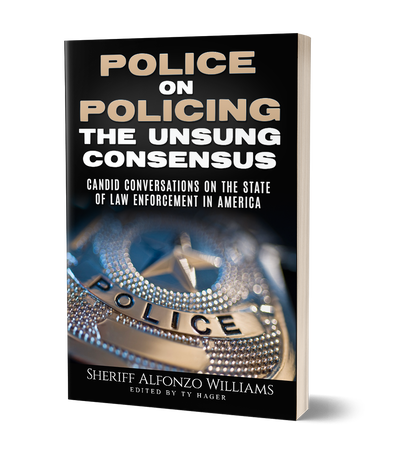 "This was definitely well thought out and the author drew upon not just his experiences but from a diverse pool of law enforcement professionals."
POLICE ON POLICING: The Unsung Consensus
Beginning with the civil rights riots of the 1960s, through Rodney King, Michael Brown, George Floyd, and scores of cases in between, the public perception of policing in America – especially from the perspective of the disenfranchised – has been on a long downhill slide. Despite the dedication to service of the vast majority of our nation’s men and women in blue, incidents of abuse and lives lost to police brutality have made headlines for well more than a generation, culminating in an apprehension and distrust of law enforcement now shared by an alarming number of Americans across constantly-expanding demographics. Never have so many demanded serious, systematic reform.
What too few realize is that most of our country’s law enforcement leaders and professionals – those who truly consider their chosen field a calling – couldn’t agree more.
In Police on Policing: The Unsung Consensus, Burke County, Georgia sheriff Alfonzo Williams – who in his 30-year career has also been a patrol officer, detective, police academy instructor, and police chief – reached out to 14 similarly-seasoned law enforcement professionals across the country for a frank and revealing discussion of the issues and challenges facing police and sheriffs’ departments as they struggle with reform, accountability, and the uphill climb to regaining the trust and respect of those whom they are sworn “To Serve and Protect.”
Covering topics including education, training, psychological screening of officers, use of force, body-cams, jurisdictional conflicts, unions, racism, and the often counter-intuitive influence of politics, these experts discuss not only what’s wrong with the system, but the ways they believe it can be fixed. 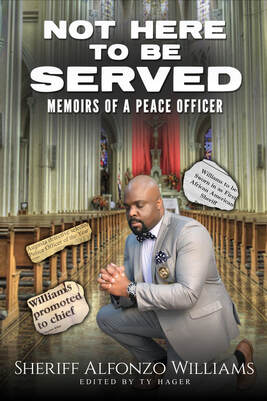 "Loved the way that Sheriff Williams has shared his testimony in such a relatable way. A good read for anyone that needs encouragement to pursue your dreams and not give up."
“More than anything, it’s about service and gratitude.”
So begins the incredible true story of Alfonzo Williams, one of seven children born in poverty to a single mother in small-town Georgia. From these harsh and humble beginnings sprang a lifetime of service: A police officer at nineteen and detective at twenty-one, Williams rose through the ranks to become his hometown of Waynesboro, Georgia’s first African-American police chief. In 2016, he was elected sheriff of Burke County (of which Waynesboro is the seat) – also the first African-American to hold that post.
In his own words, Alfonzo tells of the struggles and challenges - along with the tragedies and triumphs - he’s faced through a lifetime of striving to be of service, and of the faith, family, and friendships which inspired him along the way.
Just some of the photos you'll find in "Not Here To Be Served"
ABOUT THE AUTHOR
In the course of his thirty-year law enforcement career, Alfonzo Williams has been a patrol officer, detective (specializing in child-abuse and missing persons cases), special investigator for the Burke County, GA Sheriff's Office and the Augusta District Attorney's Office, an instructor at multiple police academies (and director of two), police chief in Waynesboro, GA and for the Richmond County Board of Education,  and - since  the beginning of 2017 - Burke County Sheriff. A life-long proponent of the "social worker" (as opposed to "crime fighter") approach to policing, Williams is a firm believer in the power of law enforcement to effect changes in the community which create an environment less susceptible to crime. As Sheriff Williams has said, "If we're going to resolve crime and poverty and homelessness and delinquency and abuse, we've got to start with our children."

Yet Williams is no stranger to the crime-fighting elements of the job either: He first rose to prominence as an Augusta detective when - at just 23 years old - he led the investigation into the 1994 disappearance and murder of social worker Mary Colley Stewart (about which he's writing a new book, and for which Robert Eugene Fielding was sentenced to life imprisonment). He's also drastically cut crime rates, both as Waynesboro Police Chief and Burke County Sheriff - crime dropped over fifty percent in the first year of his first term as sheriff (see video below).